Medals for Varey and Hawkes in Dakar

You are here: Home / Competitions / Medals for Varey and Hawkes in Dakar 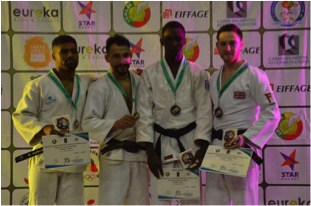 Having won a European cup medal earlier in the year, this was Hawkes’ first Continental Open medal and the British fighter made a strong start as she beat Aguirata Kabore (BUR) inside 13 seconds. She then had to grind out her semi-final against Karene Agono Wora (GAB), outlasting her opponent in a tough contest. Ayuk Otay Arrey Sophine (CMR) proved too strong in the final though, leaving Hawkes with silver.

Recovering from a serious elbow injury, Varey, added a third Continental Open to his collection with a strong showing in Dakar. He made short work of Moctar Nourou Sourakatou (NIG), winning his first-round fight with just 42 seconds on the clock. His quarter-final was also won inside four minutes as he saw off the challenge of Adebayo Frederic Olympio (TOG). His semi-final saw him take on former African Senior Champion Houd Zourdani (ALG) and the Algerian judoka proved too strong on this occasion. However, Varey made up for any disappointment as he came through his bronze medal fight against Senegal’s Jeannot Diatta, with a waza-ari score proving decisive.

🎉 From clubs to coaches, referees to parents, a

☕️ Grab your morning paned and join us for a t

💚 On the last day of Mental Health Awareness We

💚 It has been inspiring to see so many members

☀️ Sunshine AND insights into judo as you have never heard before? Your weekend listening is ... sorted thanks to the NEW @BritishJudo podcast 👉 http://ow.ly/4Nyy30qL1t7

The latest details of emergency support for clubs in #Wales.

This website uses cookies so that we can provide you with the best user experience possible. Cookie information is stored in your browser and performs functions such as recognising you when you return to our website and helping our team to understand which sections of the website you find most interesting and useful.