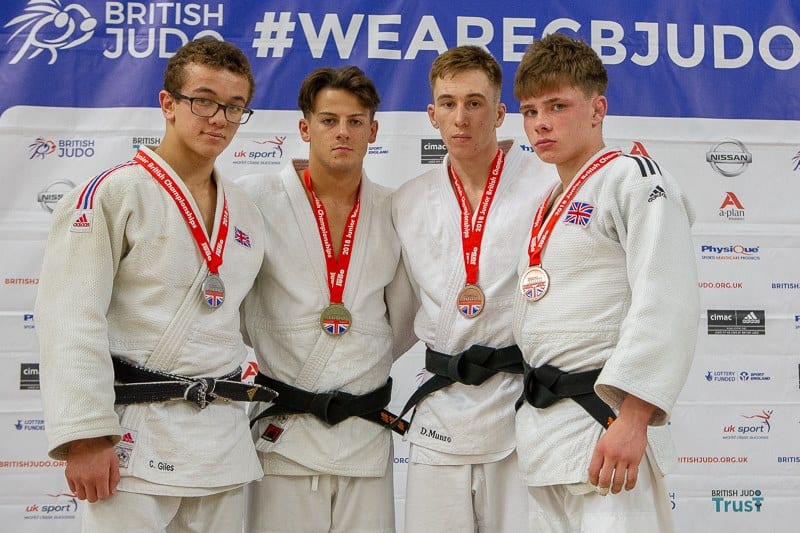 Judoka return to Wales with 7 medals from the 2018 British Junior and Senior Championships.

The team travelled to Sheffield as the English Institute of Sport (EIS) played host to the 2018 British Championship & Team GB Trials, the final contest of the year. Producing some solid performances, judoka ensured the trip north was not in vein, returning with no less than 4 Junior medals and 3 Senior medals.

In the junior category Dan Rabbit (-60kg) fought brilliantly to bring home the gold to finish a successful year.  Holly Jones (-70kg) won silver, and only narrowly beaten to the top of the podium. In the -52kg category Jasmine Hacker-Jones showed her strength and determination to claim bronze as she prepares to move up in age category.  Oliver Barratt followed his teammates onto the podium to win bronze in the -100kg category.

The second day of competition saw the seniors in action. Greg Varey (-66kg), who had previously won titles in all other age groups, completed his collection of British Championships medals with a first success in this category.  Despite competing the previous day, Dan Rabbit (-60kg) had his eye on the top prize and once again topped the podium to claim a very impressive double gold. Holly Jones (-70kg) also returned to the mat for the second time to match her silver medal from the previous day. In the same category Rachel Hawkes demonstrated her grit, claiming bronze just behind her teammate.

The championships were a great end to what was a successful year in 2018.

Happy birthday to Natalie Powell who is celebratin

🥳 A DATE FOR YOUR DIARY! Judo is set to take pl

🎉 There were no Monday Blues in Builth Wells th

Welsh judoka @Nataliep_90 has been selected to the British Judo team for the upcoming European ... Championships 🥋

As @ukantidoping celebrates 🔟 this year, 2021 sees changes to the World Anti-Doping Code. It is ... important that athletes and their coaches understand the major changes aligned to the sport ➡️ http://ow.ly/j7x350BYEdk

We can’t wait to see you back on the mat and know will be ... cheering you on from Wales!