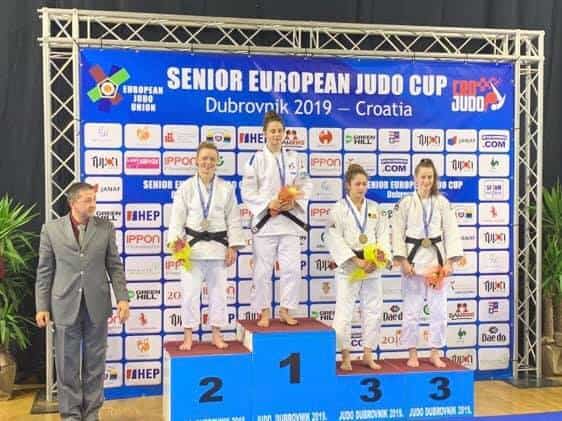 Stephanie Walker travelled to Croatia for the EJU Senior European Judo Cup 2019 held between 13th-14th April.  Once again, the Croatian Federation held a strong and well-organized tournament in the scenic Dubrovnik.

In only her second competition of the year, the 21-year-old judoka’s performance on the mat was nothing less than impressive as she made her way onto the podium.

The completion saw Walker take to the mat four times.  She breezed through the first round as Isreal’s Ariel_Bezalel was disqualified. The second round Walker faced Belgium’s Eveline Delbaen, with the fight going down to golden score where she held her opponent down for ippon.

Taking to the mat for the penultimate round, the Netherland’s Lesley Koorn proved too strong for Walker this time, narrowly winning the match in the last second.  Not one to be knocked down, Walker came back in the semi final to arm lock her opponent, 21-year-old Swiss judoka Ines Amey, for ippon.

Happy birthday to Natalie Powell who is celebratin

🥳 A DATE FOR YOUR DIARY! Judo is set to take pl

🎉 There were no Monday Blues in Builth Wells th

Following the announcement from the First Minister yesterday, please find an update regarding our ... Return to Judo framework below.

Diolch yn fawr for your patience and understanding.

ICYMI | We are offering a reduction to those renewing their licenses between 1st October 2020 and ... 15th March 2021. Members who renewed in lockdown will also receive a reduction on their next renewal ➡️ http://ow.ly/HGxB50BWjps

Judo will be back! Diolch for your ongoing support.

With extra support coming soon and no deadline to apply, the #BeActiveWales fund is there to PROTECT... and PREPARE the clubs and community organisations or groups that help people be active and take part in sport. Find more information 👉 http://ow.ly/io8750BWgLM #ClubSupport

A fire break lockdown will begin in Wales on Friday at 6pm. Outdoor exercise is still permitted, but... only with those you live with and must start and finish at home. Find FAQs on what will be permitted here ➡️ http://ow.ly/MpZj50BWezl

Full update will be provided this week.