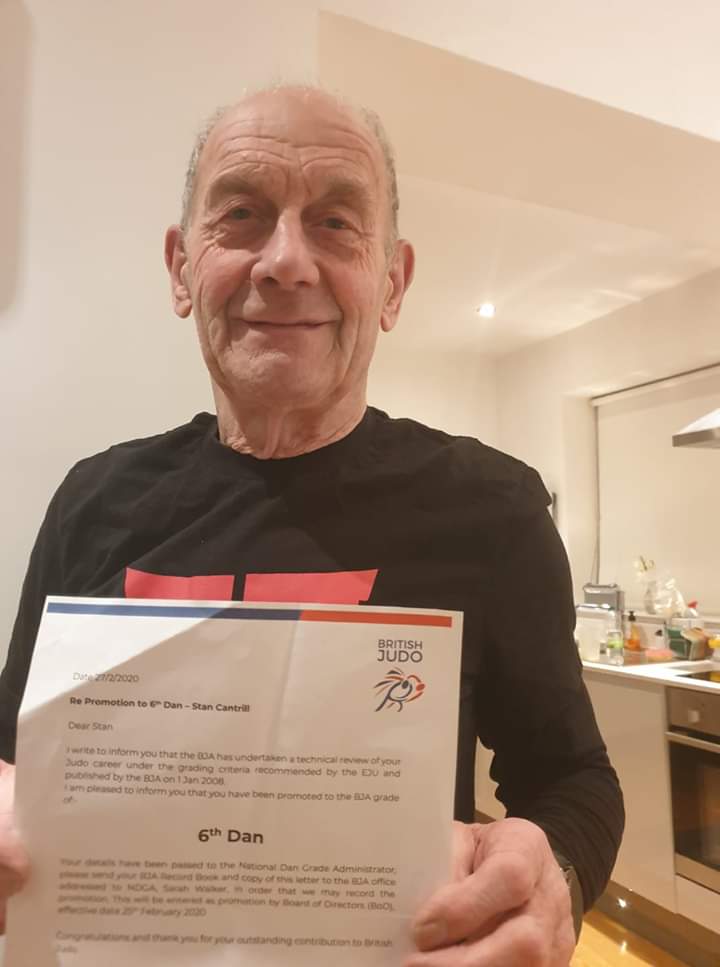 Welsh Judoka Stan Cantrill has been awarded his 6th Dan.

Stan Cantrill, 75, who began his judo career at Great Barr Judo Club in Birmingham, where he discovered the sport at as a youngster has been awarded his 6th Dan. A well known name on the British Masters scene, Catrill has achieved what many aspire to throughout their judo career.

Cantrill has many accolades to his name, including Commonwealth Championship, European Veteran and World Veteran medalist. However, the British Judo Veteran’s Commission member, who is also a level three coach and qualified referee, has no plans to hang up his judogi.

A valued member of our Welsh Judo community, we would like to like to congratulate Stan on his fantastic achievement and thank him for all he contributes to our sport.

POSTPONED – This Is Judo – Ne-Waza Competition

🗣 Return To Judo Survey is LIVE We are committ

FUNDING UPDATE Next week will see the launch of t

‪#ThrowbackThursday to the 2018 British Open Kat

👏 Congratulations to Damon McGarvie of Neyland

ICYMI |There is still time to take our Return To Judo Survey! Together we can shape a bright future ... for our sport 💪

From 13 July groups of up to 30 people can partake in organised sport and leisure activity outdoors.... Great news for Talent Cymru athlete @stephhwalker_ as she can get teammates involved with her 10k training following @WelshGovernment guidance 🏃‍♀️💪

Following the @fmwales‘s statement today the change in regulations will allow groups of up to 30 ... people to partake in organised sport and leisure activity outdoors from Monday 13 July.

A positive step forward for sport as a whole in Wales 😃

The launch of the Be Active Wales Fund earlier this week is extremely positive news for our judo ... clubs.

Find more information, including eligibility and how to apply here 👉 http://ow.ly/iRfL50ArAKs

This website uses cookies so that we can provide you with the best user experience possible. Cookie information is stored in your browser and performs functions such as recognising you when you return to our website and helping our team to understand which sections of the website you find most interesting and useful.