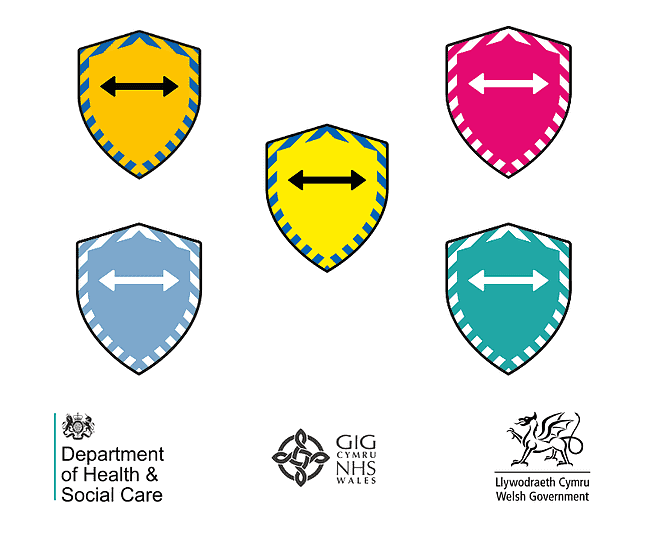 The reopening of indoor facilities allowed for judo clubs to reopen on a restricted basis from Monday 10th August, but COVID-19 has caused a new focus on the need to maintain social distancing. There will be those looking to return to the judo community, and while the public has made great efforts at this as with all things that require on-going conscious efforts, there are many who feel more vulnerable than others as the virus remains present in our communities and the shielding period coming to an end.

These factors have lead to a number of individuals exploring the concept of polite prompting of others by a means of self-identifying with a badge or similar, and so the NHS have established the Distance Aware initiative has been established. The initiative has been launched to enable individuals and organisations to politely prompt on-going distancing and respect of individual social space.

There is a general understanding of personal responsibility and respect for others as demonstrated by 99% of those who took part in a Google poll conducted in June expressing that if they saw a badge/pin they recognised they would respect someone’s space and keep their distance.  The poll included 1749 people and found that over 91% thought it was a good idea to have a badge or similar available to enable individuals to self-identify, with over 95% believing this choice could help those who feel vulnerable during the upcoming transition period.

The ability to self-identify as wanting your space respected and others to maintain distance has been largely welcomed. The symbol designed has been done so with the aim of maximising inclusivity through its simple shape, lack of text and colour palates. The scheme is open to everyone (not just those who feel vulnerable or who may have been shielding) reflecting the fact that the need for on-going social distancing is everyone’s responsibility going forward. This was supported by over 50% of those not shielding who did the poll expressing a will to self-identify and engage in the scheme.

The scheme has been formally endorsed by the Welsh Government and has been presented to HMG with outcome pending. The symbol can be accessed and downloaded via the Bevan Commission website, along with posters, design guidelines and communications pack.

The Welsh Sports Association have made some of the resources available on their website via the phased return to sport link.

If you have any questions please contact the Welsh Sports Association or Disability Sport Wales directly.

Today is #MindfulMonday, a day to celebrate the be

Our Performance Pathway judoka have taken the @ukc

“Behind every fearless player is a fearless coac

Happy @ukcoaching Week! A time to celebrate all

🥳 Join us in wishing a big Penblwydd Hapus to Y

👏 Coaches have been heroes to keep us active, c

"The most important role of the IJF, and in this situation particularly, is to protect our sport and... athletes." Wise words from @MariusVizer

In light of the continued uncertainty around COVID-19 @Judo continue a #HealthFirst approach 👉 http://ow.ly/3XgA50BA4lj

Please note Sport 80 will be down for an update between 5pm on Wednesday 30th September until 9am on... Thursday 1st October. If you require assistance regarding membership please contact office@welshjudo.com

Diolch am eich amynedd. Thank you for your patience.

The #BeActiveWales Fund continues to provide a major source of support to protect clubs and ... organisations that have been badly hit by COVID-19 and prepare them to reopen safely. Applying? Here's a handy essential requirements checklist ➡️ http://ow.ly/ocvQ50BwCRc